While plecos will eat algae, they will not polish the glass and keep it spotless. No animal will do that. No matter what fish you add, you will still occasionally need to clean the glass.

The common brown pleco is a terrible aquarium fish. As mentioned, it grows large and, depending on the exact species can grow between 1 and 2 feet in length. They will eat other things besides algae including aquarium plants and fish food.

If you have large aquarium and want a large pleco you would be better off considering the Gibbiceps or Sailfin Pleco, Petryogoplichthys gibbiceps. It is a much more attractive fish but will grow to 16″ or perhaps a bit longer. They will also eat driftwood, which may be necessary in their diets as well as fleshy foods such as shrimp.

For most people, the Bristlenose pleco, Ancistrus sp. is the perfect algae eater. Many of the fish in the aquarium trade may be hybrids as there was a lot of confusion to the identification of these fish in the early days. You won’t often find these in the chain stores but will find them in specialty aquarium stores and aquarium club auctions. They top out at 4–6 inches. There are a number of color varieties that have been selectively bred including greenish, brown, reddish, albino and leucistic forms with blue eyes. There are also long fin varieties. Adult males develop branching growths on the nose, hence the name. If you have both sexes and provide a variety of caves, they may spawn and produce fry for you.

There are also some dwarf Pekoltia or clown plecos that can be good aquarium fish but are not very effective algae eaters. They are omnivorous and typically stay around 4″ long. Again, you want to be sure which species you are getting as some get larger.

Chinese Algae Eaters, Gyrinocheilus aymonieri, are also terrible fish for aquaria. While they are ok algae eaters when small, they become territorial and attack other fish when they get large. They can get up to a foot long but by half that size few people are willing to keep them. They are another chain store staple that is totally inappropriate for most people. Are you sensing a pattern here? The fish the chain stores carry for algae control do a horrible job and outgrow your aquarium.

Better fish in this category are Siamese Algae Eaters (Crossocheilus siamensis) or Flying Foxes (Epalzeorhynchos kalopterus). Both get to about 6″ but Flying Foxes can become territorial as adults.

Newer in the hobby are Garra species, especially the Panda Garra. It is moderately attractive and will eat algae. It is best kept in small groups and also requires some animal material in its diet such as frozen bloodworms.

For smaller aquaria you should look for Otocinclus catfish, commonly called Otto Cats. There are a variety of species but the Common Otto’s are relatively inexpensive. They all stay small, under 2″ or so, and prefer to be kept in groups of 6 or more. They are a bit more sensitive than other algae eaters so be sure the tank is well-cycled. They don’t bother plants and can often be seen resting in a group on broad-leaved plants. Because of their small size, they should only be kept with smaller, peaceful fish.

One of the best algae eaters is the Amano Shrimp, Caridina multidentata. This shrimp is named after the late Takashi Amano who transformed the planted aquarium hobby. A group of these shrimps will continually patrol the aquarium and clean algae from all surfaces. They don’t eat plants but will remove dead tissue. They won’t reproduce in the aquarium, however, as the young need salt water to develop. They get to about 2″ in size, but also need to be kept with peaceful fish.

Red Cherry Shrimp, Neocaridina heteropoda, are also good algae eaters for aquaria with smaller, peaceful fish. They give birth to miniature versions of the adults and in a well-planted tank, some may survive. They come in a variety of color forms besides red and some people specialize in keeping shrimp for their own sake.

Almost all algae-eaters benefit from supplementing their diets with algae wafers or pieces of zucchini, summer squash, or other vegetables. Many will also eat the flake food you feed to your other fish. Many algae eaters also eat the small critters that live in the algae in the wild, called Aufwuchs. It is unlikely that the algae in your aquarium is as rich in this as it is in the wild.

If you are having algae problems there are two areas that you can correct to help your algae eaters keep up. Excess nitrate from an overstocked tank and not enough water changes is the most common. Nitrate is plant fertilizer and some algae can take it up more quickly than some aquarium plants. You should be doing 10% weekly or 25% monthly water changes. If you haven’t been doing this, you should change 25% twice a week for a few weeks until you get this problem under control. The other thing is light. Too much light also promotes algae. Make sure your aquarium is not getting direct sunlight during the day when you are not home. The sun moves north and south over the course of the year, so if you set up the tank in the summer, it might be getting direct sunlight in the winter. Watch it on a sunny weekend day to see. Unless you are growing high light aquarium plants, you don’t need to have the aquarium lights on when you are not home. Unless the aquarium is in a very dark room, there is enough light for the fish during the daytime. Put the lights on a timer and have them come on when you get home and shut off when you go to bed. Plants such as Anubias and Java Fern will do fine at this light level. You can override the timer on the weekends or when you are home early.

Finally, don’t go to the big box stores for your fish, especially algae eaters. Many of the fish they have are unsuitable aquarium fish for the small community aquarium.

Do fish get bored living in an aquarium for all of their life? 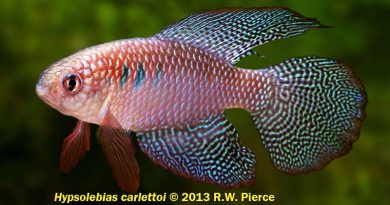 Five of My Favorite Killifish